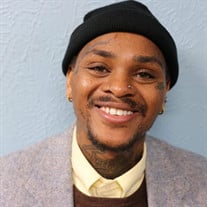 Zuwa Goro was born on 01/01/1995 in Irucuro, D.R.C Congo, Africa. However, everyone who knew him called him by his stage name, &#8220;Goro.&#8221; His stage name Goro means the fifth son or enlightened son in Japanese. Goro graduated from New... View Obituary & Service Information

The family of Zuwayidi Byiringiro created this Life Tributes page to make it easy to share your memories.

Send flowers to the Byiringiro family.