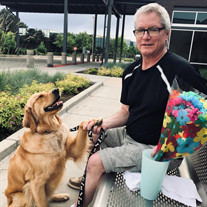 William Joseph Beezley, 55, born in Denver, CO, entered eternal rest on December 11, 2020. Fondly known as ‘Bill’ to family and friends, Bill was born to John R. & Anna R. (Sokolik) Beezley of Littleton, who have both preceded him in death. Bill grew up in Littleton in the 60’s, 70’s, and 80’s when it was a small part of the growing Metro Denver area, which worked well for his chosen professional life. Bill spent most of his career in the construction industry and was a skilled craftsman who knew how to build and fix most anything. He is survived by his two children, Joseph (Joey), and Kelsey, his dog, Molly, his 6 siblings, John (Mary) Beezley, Barbara Bordas, Robert Gregory Beezley, Casey (Jeff) Swenson, Mary Lou (Gale) Lawrence, Virginia (Mark) Ryan, and was Uncle to 18 nieces and nephews. Bill was the ultimate prankster, which began in his childhood, and he will be forever remembered for his great sense of humor, quick wit, and practical jokes. He was still remembered fondly in Littleton Public Schools when the next generation of Beezley’s started years later. A Memorial Service in celebration of his life will be held in early 2021, more details will follow. Please consider a donation to a charity in Bill’s name in lieu of flowers.

The family of Mr. William Beezley created this Life Tributes page to make it easy to share your memories.

Send flowers to the Beezley family.