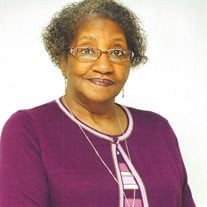 Virginia J Susong Pearson Virginia fondly known as Gin to her family, went home to be with the Lord on August 24,2021. Gin was born and raised in Elizabethton, TN to Warren & Nancy Horton-Susong. Gin, grow up playing basketball and doing hair. She would practice on her sisters and soon became the town beautician. Virginia married Theodore Forney at the young of 15 and had 2 children while Theodore was in the military. Janice & Teddy Forney. Later Gin & Theodore moved to Saginaw Michigan where she had 2 more children. Diane & Tammy Forney At the end of Gin’s first marriage, she left Michigan and moved to Des Moines Iowa, where she met and married Robert Pearson her second husband who she remained married to for over 50 years until his death. She had 3 additional children by Robert Pearson, Robbie (deceased), Kelvin, and Gina Pearson. While raising her family in Iowa she worked as a nursing home assistant. When not working Gen loved to cook and care for her family. While in Oklahoma she worked at Albertson bakery and became a head supervisor. She spent her later years being a private nanny and caregiver. Gin spent many years having family gatherings and cooking for all who would come to eat. She enjoyed her time caring for her family and playing dominos. She also loved to travel and spent many years attending the Susong, Horton & Green family reunions that were in many different cities around the county. While in Oklahoma she attended McKay Davis AME Church and Walls Chapel AME Zion Church faithfully and sang in the choir. Her favorite song was “I Shall Wear a Crown” and “In Times Like These We Need Savior.” She would take her grandchildren with her to church, as many of them grow up in her house. In 2006 Virginia and her late husband Robert move to Denver, CO for their remaining years. After the passing of her husband Robert Pearson, Gin moved to St. Paul Health Center where she loved to play bingo and talking with people who grow to love her. Predeceased her in death, her beloved father and mother Warren & Nancy Horton Susong, husband Robert Pearson, children Robbie Pearson and Teddy Forney, and Siblings Charlotte Haynes, Bobby Susong, George Susong, Nanette Pitts, Doris Bryson, Carolyn Susong, Edgar Susong Survivors include city & State Children Janice Forney Denver CO, Diane/Ronnie Smith Denver CO, Tammy Adams Springfield, MO, Kelvin Pearson Sacramento CA, and Gina Pearson Oklahoma City, OK 13 Grand Children: Tamara Forney, Shrica Crawford/Christopher, JR Hays/wife, Marco Hays, Monique Mayfield-Clark/Tony, Dewayne Smith/Gen, Christopher Smith, Johnathan Pearson, Casey Pearson, Sidney Pearson, Blake Roth/Shane, Kaylyn Hagler, Hollie Baker, Evan Pearson Sister: Gwen Greaves, Oklahoma City A host of Great Grandchildren, and Great Great Grandchildren, Cousins, Nieces, Nephews, and long term friends.

Virginia J Susong Pearson Virginia fondly known as Gin to her family, went home to be with the Lord on August 24,2021. Gin was born and raised in Elizabethton, TN to Warren & Nancy Horton-Susong. Gin, grow up playing basketball and doing... View Obituary & Service Information

The family of Mrs. Virginia J Susong-Pearson created this Life Tributes page to make it easy to share your memories.

Virginia fondly known as Gin to her...

Send flowers to the Susong-Pearson family.