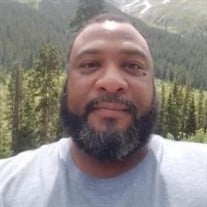 Vincent Maurice Torrie began his journey of life on May 10, 1967, in Denver, Colorado. He was born to the proud parents of Charles “Charlie” Torrie and Ethel M. Torrie York. Vincent was the second of four siblings. Vincent first gave his life to the Lord at a young age. His spiritual life was evident even as a little boy as he would walk a long distance to go to church with his cousins. He was baptized at Mount Carmel Missionary Baptist Church in Denver, CO. Vincent rededicated his life to the Lord and was baptized again with his son Brandon in 2014. Vincent realized his hopes and dreams at an early age. He had a calling for football and started playing in the little league at age 6 and continued to play through high school. Because Vincent was big in stature as a boy and chose the number “72” after William “The Refrigerator” Perry of the NFL, he was teased and was also called the “refrigerator.” He loved all sports and was very fond of the Denver Nuggets. Vincent’s hobbies included fishing, camping, and yard work. Vincent received his formal education from the Denver and Aurora Public Schools before his stepfather was reassigned to Rhein-Main AFB in Frankfurt, Germany, where he graduated from Frankfurt High School in 1985. Vincent furthered his education by attending Broadcasting School in Denver, CO. Vincent was employed with Direct TV and UPS for most of his years of employment and had many other jobs until he received a devastating ankle injury. While in Germany, Vincent met Penny James Holman. From this union Brandon Charles Torrie was born. He later met Louise Anderson Torrie at the chiropractic clinic while receiving therapy. They were later married and from their union they had two children, Vanessa Ann Marie Torrie and Bryson Vincent Torrie. Vincent’s children were his pride and joy. On June 2, 2021, Vincent was called by his Lord and Savior at the age of 54 where he took hold of eternal life. Despite Vincent’s struggles with illness and life’s adversities, he fought the good fight. Vincent was a special person, had a captivating smile with a hearty laugh. He was genuinely loved by all who encountered him. Vincent was preceded in death by his beloved father Charles “Charlie” Torrie, his grandparents Elroy Sr. and Ethel Cox, and uncles, James and Nathan Torrie. Vincent is survived by his loving mother Ethel Marie (Vernon) Torrie York, three children, Brandon Charles (Korey) Torrie, Vanessa Ann Marie Torrie, and Bryson Vincent Torrie all of Denver, CO; one sister, Desiree M. Torrie of Houston, TX and two brothers, Victor L. York of Denver, CO, and Terry (Michelle) Fritz of Mobile, AL; two granddaughters, Keemya and KeBrieanna Torrie of Denver, CO; and two nephews, Roger Hill and Zacari York. He is also survived by his aunts, Ferrie Lene Bailey and Ruth Lattier-Chriette of Mobile, AL, Lula Mae Cox Julyé of Denver, CO, Vianna Harrison of Marietta, GA, Bessie/Deborah Gordon and Gloria Jackson of Houston, TX; three uncles; Elroy Cox, Jr. of Denver, CO, Eddie Cox of Birmingham, AL, and Ralph Bernard Cox of Mobile, AL, and a host of cousins, other relatives, and friends.

Vincent Maurice Torrie began his journey of life on May 10, 1967, in Denver, Colorado. He was born to the proud parents of Charles &#8220;Charlie&#8221; Torrie and Ethel M. Torrie York. Vincent was the second of four siblings. Vincent first... View Obituary & Service Information

The family of Mr. Vincent Maurice Torrie created this Life Tributes page to make it easy to share your memories.

Send flowers to the Torrie family.