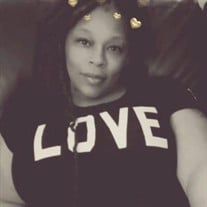 Shavonne Martel Penn was born June 6, 1983 to Danette Marie Penn and James Wallace Austin in Enid, Oklahoma. Shavonne was a happy, curious baby. She was very stingy as to who she would let hold her. She was called little Red by her dad beaver . She was prissy as a little girl. Shavonne was introduced to the Lord at a very early age by her granny at New Jerusalem Missionary Baptist Church. She enjoyed singing in the choir with her cousins and going to Sunday school. Shavonne attended Stedman Elementary School and Union Baptist School. She also attended Smiley Middle School, and graduated from East Highs School in 2001. After graduation she moved back to Enid , Oklahoma. October 1, 2003 Shavonne welcomed her handsome son Taveon Jacque Long. She loved her son Tae Tae m he was the apple of her eye. Shavonne finally moved back to Denver where she attended many of her sons Basketball, Football, and Soccer games. You would find her in the stands screaming the loudest. Shavonne enrolled into Concord Medical School , where she studies to be a Certified Nurses Assistant. She worked for Amazon , and also managed several restaurants throughout her career. Her favorite past time was being team mom for her son in the various sports he exceled in. Shavonne enjoyed hanging with family and friends at many family gathering. You would find her dancing , cracking jokes, then falling asleep to get her second wind. Shavonne gained her wings to be embraced by the Lord, and left those to cherish her memories. She was preceded in death by her father James (Beaver) Austin, Grandmother Johnnie Mae Penn, She leaves behind her son Taveon J. Long, her mother Danette Penn, her brother Lamunt Dority ( of Enid , OK) Aunties Renee Smith , Pamela Dorsey, Uncle Michael Dorsey ( All of Denver, CO) many Aunts, Uncle, lots of Cousins, Best friend ( BFF) Leah Johnson , Jennifer Morrison whom is like a second mom to Taveon.

Shavonne Martel Penn was born June 6, 1983 to Danette Marie Penn and James Wallace Austin in Enid, Oklahoma. Shavonne was a happy, curious baby. She was very stingy as to who she would let hold her. She was called little Red by her dad beaver... View Obituary & Service Information

The family of Shavonne M. Penn created this Life Tributes page to make it easy to share your memories.

Send flowers to the Penn family.