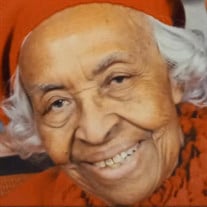 Ruby Jean Harris was born in Mendoza, Texas September 10, 1922, to the union of Mr. James "Jim" and Mrs. Ludie Harris. The Harris family was quite large, and Ruby Jean grew up with twenty-one brothers and sisters. As an adult when talking about... View Obituary & Service Information

The family of Mother Ruby Jean Harris created this Life Tributes page to make it easy to share your memories.

Send flowers to the Harris family.