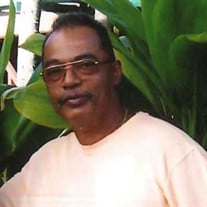 Robert was born August10,1945 to Robert and Margaret (King) Collins in Chicago, Illinois both of whom preceded in death. Robert grew up in Chicago, IL and New York City, New York and was a proud graduate of Hirsch High School in Chicago, Illinois. After high school, Robert joined the United States Air Force. He was deployed oversees as a communications specialist and served his country with honor and distinction. He was a proud Vietnam Veteran and he was honorably discharged in January 1969. After his discharge, Robert worked in the banking industry for several years. He was a founding member and President of Mile High Bankers in Denver, CO. Robert later transitioned to the United States Postal Service, again serving with distinction until his retirement in August 2011. Robert accepted Christ at a young age. He joined Heritage Christian Center in 1990. He faithfully served his church family as a greeter and usher until he was too ill to serve. The joys of his life were fishing, listening to old-school music, watching action movies and old school westerns. He loved football, especially the Denver Broncos. He was fun-loving and loved reminiscing with friends and family. ​ Robert met Cynthia Booker in December 1980 and married in February 1983 and had a beautiful union until his death. Not a day went by that you could not see his love and commitment to Cynthia and their life together. In addition to his beautiful bride, Robert leaves behind to celebrate his life, cherish his memory, and live his legacy his five adult children, Suzanne, Stephanie, Stephen, Marlena and Robert A (Monica). He leaves six grandchildren that as he says “are the apple of my eye”: Dyonasis, Charles, Stacy, Amari, Amiyah and Isaiah, (who all lovingly called him Pa-Pa), his sister, Terri White, and his other sisters Donna Williams, Patricia Griffin, Wendy Richardson-Atwell. His two sister in-laws Tonja Booker, Joyce Searcy and one brother in-law Norman Booker Jr. He was also blessed with a host of nieces, nephews, and numerous Cousins who were his "running buddies" growing up. His family brought much joy to his life. Robert also has friends too numerous to count, but truly cherished in ways that only Robert could. All though Robert was a man of few words one of the few things that he insisted was that his family be loving, helpful and stay connected. One of his biggest joy was taking his family back to his birthplace Chicago and doing what he could to make family reunions successful. One of the things that no one could ever take away from him was his honor. He never swayed from his code of honor and would give his life to save another. Robert prayed instead of cussed and he prayed when he upset. Click this link to view additional details about Robert's Services: https://my.gather.app/remember/robert-collins-2022

The family of Robert Collins created this Life Tributes page to make it easy to share your memories.

Robert was born August10,1945 to Robert and Margaret
(King) Collins...