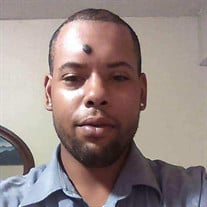 Phillip Darnell Williams was born September 8, 1987 at Mercy Hospital in San Diego, California. He, with his parents, Larry and Erma Williams, and younger sister, Angelica, moved to Denver Colorado in 1995. Phillip loved to play music, especially the drums. He also played saxophone, and participated in the music program throughout his elementary and high school days. He attended East High School where he play a concert at Red Rocks Amphitheater and made a studio recording with Keith Oxman and the East High Jazz Ensemble. He graduated from Hincknley High School in Aurora Colorado in 2005. “Mr. Phil” (as he was affectionately called by one of his ‘in-laws’) was well-mannered, respectful, and had a generous heart. His niece, Anjelikah liked him a lot. He liked to listen to traditional jazz standards and gospel music. He was baptized in the water in the name of Jesus on October 8, 2010 at Bibleway Christian Church where he liked to attend church. Phillip pass from this life on July 30, 2021 in Denver, Colorado. He is survived by his parents, Larry Williams and Erma Williams of Denver; his sister, Angelica Williams of San Diego; several nieces, nephews, aunts, uncles, cousins, and friends, including Crystal of St Louis, Margaret and Coretta of Los Angeles.

The family of Mr. Phillip Darnell Williams created this Life Tributes page to make it easy to share your memories.

Send flowers to the Williams family.