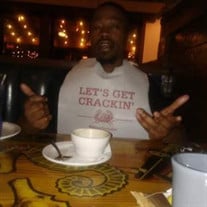 Leylond Devon Hardy was born December 5th, 1984, in Denver, Colorado to his parents Michael Ray Edwards and Valerie Denise Hardy. He was the second of four children. Leylond was a very happy and often stubborn, child. While being raised by his grandparents, James Samuel Hardy and Aprilene Hardy, and his Uncle James Samuel Hardy II, he was very determined from an early age to get his way which would follow him to adulthood. So much so that as a child, he would hold his breath until he passed out. He would have his mother and grandmother in a panic! Also, as a child he enjoyed riding his bike, skateboarding, bonding with his brothers and siters and doing anything athletic. As time passed, he became mischievous to the point where his grandfather nicknamed him “Sneaky Lee”. His ways went from pushing his baby brother Lamar down the stairs in a basket, punching his older brother Javae’s door as hard as he could, to borrowing his brother Sam’s car without asking or even throwing crayons at his grandfather while he slept. No matter what Lee was always up to something. While maintaining his schemes, he was always ready to go to church Sunday morning with his Granny-Gray. His “businessman” skills kicked into full gear while in middle school. He started cutting grass for the neighborhood, selling candy at a higher rate and turning in cans to make a profit. He also began to thrive more in sports. He played receiver for the Montbello Falcons, street basketball, and was one of the fastest runners in his age group. Not to mention he was so well coordinated that he used to dance battle in “Pop Lockin’”. In high school, the “fresh” version of Leylond “arrived” as he would say. Leylond cared much about his appearance and how he presented himself as a man to the ladies. He would go on into life and had his first baby boy whom he begged to be named Leylond Devon Hardy Jr. with Monica Askew. Next, he had his daughter Laila Hardy, and his second son Noah Hardy with Naimiah Mohammad. In the final chapter of Leylond’s life, he went on to marry the final love of his life, Carmen Hardy and assumed the role of a father figure for her 5 children. He spent his life trying to bring fun and provide joy, being resilient even with his depression and his inner thoughts. His final title he assumed was “Grandpapi” as his oldest stepchild had a beautiful baby girl named Storm whom he called his “light-skin yellow gran-baby”. Throughout his struggles in life four things remained true to the end: Leylond Hardy Jr. was his best friend, he would still suck his thumb, he loved the Pontiac Grand Prix and lastly, when he loved……he loved hard.

Leylond Devon Hardy was born December 5th, 1984, in Denver, Colorado to his parents Michael Ray Edwards and Valerie Denise Hardy. He was the second of four children. Leylond was a very happy and often stubborn, child. While being raised by... View Obituary & Service Information

The family of Mr. Leylond Hardy created this Life Tributes page to make it easy to share your memories.

Send flowers to the Hardy family.