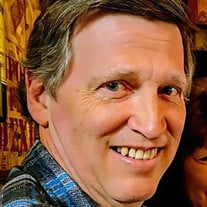 Walton, Kevin age 66, died peacefully at home on April 11, 2021 after a lifetime of volunteerism to causes including cancer, feeding the homeless, MS Walks, and the Denver Zoo There are probably others that we do not know about, he is just that kind of guy he spent his life thinking of others and doing his best to be generous and kind towards others. His family knew him only as kind, funny and a real jokester, even going to the wildly and inappropriate at times. You would laugh so hard you were snorting, or afraid you might just pee yourself. As the customer service team leader at Colorado Container, he made great friends and his co-workers will really miss him. Kevin was known for his crazy outfits, at Christmas he made all the grandchildren put on crazy hats, noses and who knows what else for the family photos. Each year it would get more and more extreme, to include the crazy rabbit costume, which we all agreed he should have been buried in… Ah well, it could not be found! Kevin had found memories of his childhood growing up in San Diego, California. He graduated Santa Maria High School in 1972. He did attend some college but felt that life had more to offer him, so he went out into the work force and experience all that life had to offer. Kevin was a music aficionado, a pop-culture encyclopedia and always the most fun person at any party. Do you know that he could actually tell you most 1970’s music with one or two notes? He is survived by his wife Toni Walton, sons Matt Walton, Ken Lowe, daughters, Jennifer Hubbard, Penny Winn, grand-daughters Dannielle Hubbard, Ashley Joyce, grand-sons Ryan Suazo, Patrick Winn and great-grandchildren Violet, Grace, Kelton, Kinsley, and Jackson.

Walton, Kevin age 66, died peacefully at home on April 11, 2021 after a lifetime of volunteerism to causes including cancer, feeding the homeless, MS Walks, and the Denver Zoo There are probably others that we do not know about, he is just that... View Obituary & Service Information

The family of Mr. Kevin Walton created this Life Tributes page to make it easy to share your memories.

Send flowers to the Walton family.