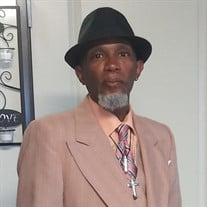 Keith Eugene Penn was born in Denver, CO on August 23, 1962 to Johnnie Mae Penn and William Sunny Penn. At a early age Keith took interest in helping his mother working in the garden growing vegetables or tilling the soil for the beautiful flowers. Keith early education started at Mitchell elementary school. He attended Hamilton Jr High School where he played basketball and football. He went on to graduate from George Washington High school. As a young adult he begin working for King Soopers grocery store he started as a cart attendant, bagging groceries where he used his charming customer service skills. In 1993 he met and married Janet Zeiman of this Union they raised two children Zack and Brianne. Keith moved and spent time in Enid, OK before moving to Albuquerque, NM where he lived for 13 years. He continued to work for Kroger grocery store where he became produce supervisor. His passion was Landscaping he mastered the skill in lawn care, flower scraping. Upon moving back to Denver he worked for JK Landscaping Company, before going own to start his own business. Keith took pride in his work providing service for family and friends. Keith accepted Jesus Christ as his savior at Balm Gilead Baptist Church, under the leadership of Bishop Acen Phillips. He became a active and dedicated member of the Deacon board. Working alongside his Deacon brother Robert Pope and his church family. He could be found delivering Food boxed to families in need. He was a member of the B.O.Y.Z where he could be found hanging out at the annual bbq in the park or chopping it up with the fellas. Keith enjoyed most of all being with his family at family get together where he was sure to make him 3-4 plates too go. Keith departed this life to be embraced by the Lord on February 28, 2021. Those left to cherish his memory: two children Zach Zeimen and Brianne Penn of Denver, Co. His Grandchildren: Blake and Connor Zeimen Denver,Co. Siblings: Renee Smith, Danette Penn, Pamela Dorsey, Michael Dorsey all of Denver, Co. William A. Penn of ATL, Ga. Keith’s nieces and nephews: Tamika Penn, Shavonne Penn, Steffaine Bookhardt, Kennyth Bookhardt, Shantele Mitchell, Brandon Johnson, Deandre Hill, Shayla Hepp, Michael Dorsey, Tori Hepp all of Denver, Ashley (Terrell) Tusey of Houston, Tx. Keith had 11 great grand nieces and nephews, many aunts and uncles, cousins. Keith is preceded in death by parents Johnnie Mae Penn and William Sunny Penn, older sister Kim Germaine Penn. Best friends and co workers Steve Burrell, Michael Maxey, TK Martin, Allan Dotson.

Keith Eugene Penn was born in Denver, CO on August 23, 1962 to Johnnie Mae Penn and William Sunny Penn. At a early age Keith took interest in helping his mother working in the garden growing vegetables or tilling the soil for the beautiful... View Obituary & Service Information

The family of Mr. Keith Eugene Penn created this Life Tributes page to make it easy to share your memories.

Send flowers to the Penn family.