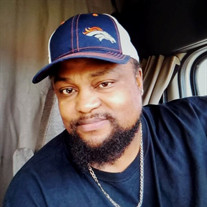 Joseph Alexander Weaver was born on March 5, 1980, and passed away on February 20, 2022, following a hard-fought battle against the Corona virus. He was 41 years of age. Joseph’s mother, Florence “Sug[ar]” Ray Weaver, gave birth to five children whose bonds were instant and enduring. As children, LeShelle looked after her brothers and served as mom’s back up. The boys in turn, spent endless hours playing with their Dukes of Hazard model cars and Transformers action figures. It was this environment that likely sparked Joseph’s lifelong love of home cooked southern influenced foods. There was usually a cake on the table – carrot cake was Joseph’s favorite – and home cooked meals each day. His childhood home also sparked Joseph’s interest in trucking as he modeled himself after his father Prester “PA” Weaver. Both were charismatic long distance truck drivers. A graduate of Aurora Central High School, Joseph, was also known for his intelligence and critical thinking skills particularly with regards to race and race related matters. Joseph admired Malcolm X and had recently reminded one of his siblings “Our forefathers weren’t the pilgrims. We didn’t land on Plymouth Rock. The rock was landed on us.” As a black man in America, Joseph faced and overcame many barriers. At the time of his death, he was in the process of purchasing 18-wheeler trucks with the goal of establishing his own fleet of independent truckers. He and his brother AKA best friend, Christopher, were actively engaged in peer mentorship aimed at setting and planning with regards to entrepreneurial goals. Always a big sister, LeShelle was in the process of designating material backing in support of her brother’s goals. During nearly 42 years of life, Joseph filled the world of those who knew him with big warm smiles, a sharp dry sense of humor and love. Joseph's love of others is his greatest legacy. He is survived by his daughter, Mystique Weaver and grandsons D’lajhuan Stevens and Kairo Weaver; his brothers Christopher Mobley and Prester Weaver; his sisters LeShelle Woodard and Deanna Weaver; his "partner in crime" LaTonya Dempsey and a large number of nieces, nephews, aunts, uncles, cousins and other relatives. Joseph has crossed over into the arms of God and joins his parents, Florence Ray Weaver, Prester “PA” Weaver, and his brother Henry Armand Pierre Peugeot Weaver.

The family of Joseph Weaver created this Life Tributes page to make it easy to share your memories.

Send flowers to the Weaver family.