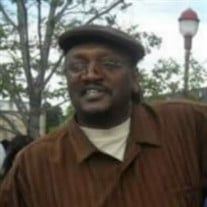 John H Thornton was born September 30, 1965 In Baltimore Maryland to his parents Johnny Henry Thornton and G Thornton. He was the second born in the family. He was raised surrounded by his brothers, Stanford, and Quentin and his little sister Valerie. As a child he watched his younger siblings as their mother worked two jobs! He also liked to collect records, and he loved his hats, he wouldn’t even take them off even while playing basketball! Mr. cool! He was a jokester he love to scare his younger siblings after watching scary movies and thought that was the funniest thing ever! He was a protector of his family from childhood to having his own children. In 1985 John met Gail Dixon and in that union he was blessed with two daughters, Anisha and Janay Dixon his baby girls! Although they are union didn’t last they remain friends. Later he met Lavon Noel and in that union he was blessed with a son Little John Henry Thornton the third, his little man. He was later blessed with two granddaughters Jazmyne and Joi Newbold who both were an addition of joy and pride in his life, To them he was Paw Paw John! He loved spending time with his children and grandchildren it brighten his day when they were all together. John and his brothers often watched movies or football together, or sometimes just riding around in his car. His sister is going to miss cooking for both her house and his, she would cook a meal and he would call and ask what you cook? I want some. She’s going to miss the holidays spent at her and her nieces house all together as a family without him. His nieces and nephew are going to miss uncle Jay Tee! He was always there for every event in their lives and if he couldn’t make it he would send his love, but truly that rarely happened he tried never to miss any event! His two nieces Qoya and Bre are going to miss taking their uncle to the store at times or just driving him around and sometimes keeping them hostage at his house talking for hour's which they didn’t mind. His great nephew Elias he’s going to miss him picking him up from school sometimes and going to Burger King. His older cousin Wendell who is like his older brother is going to miss him coming over hanging out with him watching movies and eating, and riding around in his hooptie as his cousin called it. Overall John enjoyed spending time with his family especially during the holidays he loved his family dearly! and his family loved him and will truly miss him! His closest friends Girard, Anthony(Tunts), Norma, Willie and Glen are going to miss him dearly, with some hanging out talking and of course watching the game reminiscing on old times. John and those times will be truly missed by all those who were fortunate enough to have known him. To know John was to love him. John received his education in Denver Colorado. He went to JFK high school but got his diploma at job core. He worked for Spear Security in which he retired early, he worked well with his coworkers. John departed this life on April 19, 2021 in Aurora Colorado. Those left to cherish his memories and mourn his loss include two daughters Anisha (Jovan) Dixon, Janay Dixon, one son Little John Thornton the third, two granddaughters Jazmine, and Joi Newbold, two brothers Stanford Thornton, Quentin Thornton, one sister Valerie Thornton, God sisters Twyla Grier, Tiffany Ogman, Destiny Jackson, close cousin Wendell Owens, the Queen’s of his children Gail Dixon, and Lavon Noel, Close cousin Wendell Owens, niece’s LaQoya, Breonna, DonnaShae Thornton, nephew’s Damar Riley, Stevie Campbell, Stephon Thornton, Imani Williams, Iyannah Grier, Amiyah, Anaii, Ogman, Jade, and Jalynn Jackson. And other host of aunts, uncles, cousins, other relatives and many friends.

John H Thornton was born September 30, 1965 In Baltimore Maryland to his parents Johnny Henry Thornton and G Thornton. He was the second born in the family. He was raised surrounded by his brothers, Stanford, and Quentin and his little sister... View Obituary & Service Information

The family of Mr. John Henry Thornton JayTee created this Life Tributes page to make it easy to share your memories.

Send flowers to the Thornton family.