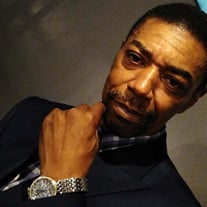 James Anthony Adams was born March 4th, 1960, in Cairo Illinois. He was the 7th of 9 children born from Paul Meeks and Bessie Parsons. His Brother’s Cleo, Wayne, Mike, Terry & Bryon. His sister’s Florence, Toni & Karen. He received his education from Eisenhower High School and later Millkin University in Decatur, IL. He was a professional electrician and entrepreneur. In his free time, he enjoyed being with his family and friends. His favorite colors were green and black. His favorite music artist were the Isley Brothers, R. Kelly and Roddy Rich. His first wife Veronica “Girl” Grims. They met at Eisenhower High School prom “1979”. To this union were Shurvon, Tiberius, Wednesday and James “AJ”. He later met Vicki Hamilton of Decatur, IL. To this union daughter Jennie Jenae Slaw. Grandchildren: Domonique, Monique, Shanique, Jainique, Eunique, Joel James Jr. “BJ”, Jerzii, Teyana and Ahmiyah. His grandchildren called him “papa”. He will be truly missed by his best friends Smitty, Earl, Low, Charles, Dez, Rich and everyone in Decatur to east Denver. He will be best remembered by his ambition and mentality.

The family of Mr. James Anthony Adams created this Life Tributes page to make it easy to share your memories.

Send flowers to the Adams family.