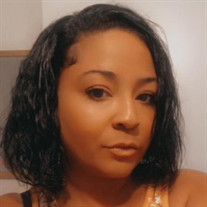 Ebonyneke Avon Futrell was born October 15, 1985. Ebonyneke was the only daughter of Brigitte (Lewis) of Lawton Oklahoma, and Emmett Futrell Sr. Of Jonesboro Arkansas. She was loved by her community, and anytime she walked into a room her presence... View Obituary & Service Information

The family of Ms. Ebonyneke Futrell created this Life Tributes page to make it easy to share your memories.

Send flowers to the Futrell family.