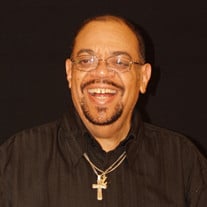 Pastor Dereck Karlos Anderson died peacefully with his children and wife by his side on March 25, 2021 in Aurora, Colorado at the age of 66. Born on June 17, 1954 in Denver Colorado to Betty Coleman and Walter Anderson, Dereck was raised by Momma Low (Grandma Foster), who made sure he regularly attended church. Dereck attended Zion Baptist Church where he accepted Christ and was born again as a young teenager. A Denver native and graduate of Manual High School (Class of 1972), Dereck was known for his friendly and outgoing personality. He sang and played the piano under the late director, Joyce Marie Davis. While working for Mountain Bell Dereck met and married Kay Anderson shortly after meeting her on the telephone. After four years of marriage, they welcomed the birth of their first daughter, Brandye. Upon answering the call of God, Dereck attended Rhema Bible College, in Tulsa Oklahoma. Dereck graduated at the top of his class in 1979 and was ordained as a Pastor/Teacher. While in Tulsa, Dereck and Kay were blessed with the birth of their second daughter, Dawn. Pastor Dereck returned with his family to Denver Colorado, to start their first church, Faith Christian Fellowship (FCF) of Denver, in the basement of their home on Pontiac St. By the grace of God, FCF of Denver grew and they moved into their first church building on 34 th and Holly St. After 13 years of marriage Pastor Dereck and Kay divorced. Pastor Dereck later met and married Zenovia Anderson, affectionately known as Momma Z. Pastor Dereck gained a son, Xavier, through his marriage to Zenovia. Under Pastor Dereck’s Spirit-led leadership the church continued to flourish. Over the years Pastor Dereck established various churches (FCF of Denver, Victorious Living Church, The Victory Church and Grace Place International) while continuing to bring revelation of the many facets of God’s grace for a deeper understanding of the will of God. In 1994 Pastor Dereck was led to merge his church with Heritage Christian Center and served in many pastoral capacities under the leadership of Bishop Dennis Leonard for 13 years. During this season of transition Pastor Dereck was diagnosed with cancer and informed that he only had two weeks to live. Pastor Dereck prayed, trusted God and was healed with a full recovery over time. Pastor Dereck started Grace Place International church in 2006 which he continued to pastor until his death. Pastor Dereck was blessed to shepherd God’s people for over 48 years. For 35 of those years Pastor Dereck and Minister Zenovia served as a ministry team to love and equip the people of God for the work of the ministry. Functioning together in their individual gifts they worked to help everyone find and fulfill their purpose in the Body of Christ. Pastor Dereck firmly believed that his assignment from God was to “help people reach life’s maximum potential” by receiving the fullness of salvation (protection, prosperity, healing, safety, and deliverance) through preaching and teaching the gospel of Jesus Christ through any means available. By the grace of God, Pastor Dereck earned a master’s degree in Christian Counseling and produced a music album with David Baroni, “Grace Places, Restful Waters”. This anointed music has encouraged and comforted many people dealing with depression and insomnia. Pastor Dereck functioned in the prophetic office and spoke the Word of the Lord’s grace in this critical and pivotal generational time. Pastor Dereck loved a good belly laugh and to socialize around what he called a ‘pot-of-plenty’ (instead of a pot-luck) especially good soul food; Pastor Dereck also enjoyed traveling, teaching and preaching, singing spirit songs, playing music, praying for the sick, reading, studying and living God’s word. Pastor Dereck leaves to honor and cherish his memory: his wife Zenovia, daughters Brandye (Brian), Dawn, and son, Xavier (Erin), grandchildren Brandyne, Brayden, Brian Jr., Jasmine, Ronin, Akio, Debonaire, Uncle Vancil Coleman, sisters Martitia, Mary, Margaret, Alana, brothers Henri, Darrell, Bernard, and a host of nieces, nephews, and cousins. He was preceded in death by his mother, Betty Darlene Coleman Smith; father, Walter Andy Anderson, Jr.; brothers Walter Anderson, III and TyRoine Anderson. Grace Place International embraces all who knew and loved Dereck Karlos Anderson, our Pastor, with heartfelt love and forever gratitude for the outpouring of love shown to the family during their time of bereavement. Be encouraged by one of Pastor Dereck’s favorites scriptures “…thanks be to God, who gives us the victory [as conquerors] through our Lord Jesus Christ. Therefore, my beloved brothers and sisters, be steadfast, immovable, always excelling in the work of the Lord [always doing your best and doing more than is needed], being continually aware that your labor [even to the point of exhaustion] in the Lord is not futile nor wasted [it is never without purpose]”. (1 Cor. 15:57-58 Amplified Bible)

Pastor Dereck Karlos Anderson died peacefully with his children and wife by his side on March 25, 2021 in Aurora, Colorado at the age of 66. Born on June 17, 1954 in Denver Colorado to Betty Coleman and Walter Anderson, Dereck was raised by Momma... View Obituary & Service Information

The family of Pastor Dereck K. Anderson created this Life Tributes page to make it easy to share your memories.

Send flowers to the Anderson family.