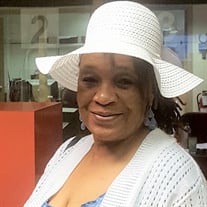 Denise Sherry Arkadie Born December 11, 1954, in Denver Colorado (Native with over 100 years Lineage) to her parents William B. Henderson (deceased) and Lillie’Mae Durdan (deceased). With her mother passing away at the early age of 14, she then went on to move in with her father and his lovely wife Julia F. Henderson (deceased) whom she called Mother. Within their family she learned she was the youngest of 6 sibling’s Billie Henderson (deceased), Shelly Hughs (deceased), Clark Henderson (deceased), Patricia Lynn Graham (deceased), Roverta (Ronald) Crockett. While growing up in Denver she attended Brown Elementary, Smiley Middle, East High School, then graduating from Emily Griffith in 1972. Jacquanette Arkadie (Jacci, a.k.a. dew) her first born child who was one and the driving factor to her graduating. She relocated to Grand Junction,Colorado to start her career with the State of Colorado home and Trainingof the develop Mentally disabled. There she met Henry Cox, who fulfilled her dream of providing a farm she always wanted. Henry had three children she loved and nurtured as her own Bonnie, Henrietta(Etta),Helen&lilHenry.Afterleaving thestatehomeshebecameanAAcounselor for Bridge house. In 1977 she relocated to Pomona, California (Sin Town). Where she resided Until 1981. Denise moved back to Denver per the request of her Mother Julia Henderson. Soon after she was Blessed with her second child Raymond Lee Davis JR. in 1984. Denise met her sweety (as she will call him sometimes lol) Sylvanus Hale Sr. and married her Husband where they shared 24 amazing years. Giving birth to two children Keilan Gerard Arkadie-Hale in 1990 and Sylvanus Arkadie-Hale (Tooga) in 1993. AS she continued her life as a self proclaimed entrepreneur of many professions. Always looking for new adventures. Matriarch of Her Home. Denise was also a Devoted SErvant of the Lord who stood by her faith. DEnise was a very affable woman who lived her life taking care of others.Who would say “Love is something you do, not something you just say.” She spoke about whatever was on her mind and heart. Dropping Jewels of wisdom daily spreading her precious diamonds of knowledge onto us. The smart woman who she was could answer any question precisely with her wit. Superwoman She was too many. Feisty as a lion with a heart made out of gold. Some of her infamous antics were, “How do you like apples,” ``Now put that in your pipe and smoke it,” ``My belt speaks every language,” I have to love you, but I don't have to like you...” and plenty more. She had an unconditional love for her family and for everyone who was blessed to be in her circle. She wore many hats. She loved cooking, gardening, crocheting and spending time with family. She had a passion for Arts & Crafts. She cherished making rag dolls, flower pot dolls, doily scarfs, blankets, paintings etc. An outstanding chef, the woman was known around town for her cooking. As soon as she put on a pot, her home would be flooded with people looking to grab a bite. Her favorite holiday was thanksgiving as she cooked her first thanksgiving dinner at 9yrs. Whatever she cooked was sure to put a smile on her face. Denise had a green thumb and could grow anything under the sun. Everyone knew you better not mess with her plants. Some of her FAvorite Flowers are Sunflowers, Lilies, hollyhocks, daffodils, and four o’clocks Loving Charismatic always full of smiles. Whos soul illuminated any room she was in. She devoted her life to taking care of others and welcomed everyone with open arms. Her home has always been a safe haven for many people who brought in a lot of people and families. Known by many as mama Denise & Aunt Niecey. A natural beauty, full of life and sunshine, beautiful to the core a Wife, Mother, Grandma, Great-Grand, Sister Aunt, Cousin, Friend That will truly be missed by her loved ones. Denise S. Arkadie gained her wings May 18, 2021 left her family to uphold her memory and Legacy Sylvanus Hale Sr. (husband) 4 children Jacquanette S. Arkadie,(Daughter) Raymond L. Davis Jr, (Son) Keilan G. Arkadie-Hale (son) & Slyvanus Arkadie-Hale Jr.,(Son) 9 grandchildren Lee G. Austin III., Auschni D. Austin, Clifton L. Austin, Aubrey D. Arkadie. Rayvon L. Jones-Davis. Jayvon L. Jones-Davis, Shamylah J. Arkadie-Hale, Sylvanus (Santana) Arkadie-Hale III, Saleem Jabriel Muhammad,. 4 Great Grandchildren Donshae M. Goff, Aleena B. Austin, Lee G. Austin IV, Ry’Lee C. Austin. Sister Roverta Crockett and God Daughter Ashley Sampson.

Denise Sherry Arkadie Born December 11, 1954, in Denver Colorado (Native with over 100 years Lineage) to her parents William B. Henderson (deceased) and Lillie&#8217;Mae Durdan (deceased). With her mother passing away at the early age of 14,... View Obituary & Service Information

The family of Mrs. Denise S. Arkadie created this Life Tributes page to make it easy to share your memories.

Send flowers to the Arkadie family.