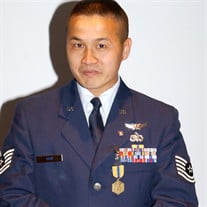 David Van Tran (aka Dave), age 53 years old, lived in Aurora, Colorado. He passed away unexpectedly on Sunday, January 9, 2022. David was born on April 3, 1968 in Kien Giang, Vietnam. He and his immediate family were the "Boat People" who left their country in 1979, after the Vietnam War ended, to seek Freedom. His deceased father was Long Tran. He leaves behind his loving mother, Lang Ngoc Tran, one older brother, Ken VanKha Tran, two younger brothers, Thuan Van Tran (Binh Le Luc) and Hung Thuan Tran (Sherry Tran Wickware), four younger sisters, Ngoc Thi Tran (Christopher Landers, partner), Michelle Tran Hort (Timothy Hort), Yung Tran, and Amy Tran Russell (Alexander Russell), and eleven nieces and nephews. David was married for thirty-two years to his beautiful and faithful spouse, Aline M. Godbout Tran, on December 23, 1989 in Canada during his military days. He also leaves behind his twenty-eight years old courageous son, Mark-Anthony Van Tran, and twelve years old lovely daughter, Keira Aline Tran. David grew up in the San Francisco Bay Area and joined the Air Force when he was 18 years old. He served in the Iraq (1991-2003) and Persian Gulf (1990-1991) Wars. He retired with honorably discharged after 20 years of service. While in the military, he traveled the world and lived domestically and internationally with his family. An Entrepreneur at heart, David loved having his own businesses. He was a licensed real estate agent, had multiple Telecom stores, owned Dave's Corner Store, and was a distributor for ionized hydrogen water. His employees loved, trusted, and admired him for his relentless work ethics and values. His military family viewed him as a hard-working, ambitious, driven, giving and helpful family man. When David walked into a room, you could not miss his outstanding personality. He instantaneously lit up the room with his sense of humor and a big smile on his face. He got along with everybody and always found ways to relate with strangers. David was very ambitious, smart, outgoing, strong, funny, independent and loving. He loved his family and he took great care of us! David was a good man with many outstanding qualities. He had a good heart, pure soul, positive outlook on life, and always went the extra mile to help friends and family in need. His generosity, kindness, and smiles will be missed dearly by anyone who knew him. The memorial service will be determined at a later date and time located at Fort Logan National Cemetery in Denver, Colorado.

David Van Tran (aka Dave), age 53 years old, lived in Aurora, Colorado. He passed away unexpectedly on Sunday, January 9, 2022. David was born on April 3, 1968 in Kien Giang, Vietnam. He and his immediate family were the "Boat People" who left... View Obituary & Service Information

The family of David Tran created this Life Tributes page to make it easy to share your memories.

Send flowers to the Tran family.