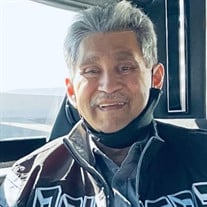 David George Leyba was born on April 21, 1955 to the union of Jess Leyba Jr and Jennie Leyba in Denver, Colorado. Dave grew up exploring the streets of Denver with his family and many friends, where they attended Cathedral High School together. When he was not causing mischief with his siblings and cousins, he could likely be found watching his mom cook in the kitchen, waiting to be the first one to grab a freshly made tortilla or a spoonful of green chili. Dave was a prankster at heart, one of his favorite hobbies was bringing laughter to everyone around him. On August 23, 2009, Dave Leyba married the love of his life, Diana. Dave showed his love in marriage tackling life’s challenges as a team with Diana, and caring for her in many ways such as waking up early to prepare her coffee, filling up her car with gas, making quick trips to the store, and many more all without asking. His heart beamed when he saw or spoke of his son, Chris, and opened his heart to Amanda and Lisa when their families combined. Dave worked as a Printer at The Denver Post for 45 years, where he was known to be a hard worker who could sleep anywhere. He loved joking with his coworkers, making coffee for the guys each morning and bringing them breakfast burritos and donuts even after he retired. In his free time, Dave enjoyed helping others, spending time with his family, working on projects with his wife, spoiling his dogs, looking at hot rods, going to yard sales, listening to good jams, and watching his favorite sports teams. Dave was a proud member of Raider Nation for decades – but if you asked him, he would say Raider fan for life. On Wednesday, July 28, 2021 at his home in Aurora, Colorado, Dave Leyba departed into eternal life. He was preceded in death by his treasured parents. Dave’s memory will forever be cherished by his beloved wife, Diana Leyba; his siblings, Gene Leyba, Ernie Leyba, Jessica “Pumpkin” Barth, and John Leyba along with their loving spouses; his children, Christopher Leyba and his wife Nicole Leyba, Amanda Haddan, Lisa Haddan and her husband Tim Chapman, and Jennifer Giallanza; his grandchildren, Weston Leyba, Rory Leyba, Melody Leyba, Theseus Leyba, Elias Leyba, Tony Wolfe, Tyler Giallanza, and Riley Giallanza; his great granddaughter, Brecken Wolfe; and a host of nieces, nephews, and amazing friends including, but by no means limited to, Dennis Leyba, Georganne Banuelos, Jennifer Gaskin, Matthew Leyba, Reymond Leyba, Lori Baker, Maria Leyba, Amanda Leyba, John Paul Leyba, Johnny Gonzalez, Bob Coffman, Mark Miller, and Tom Barth. Dave made the world a brighter place during his 66 years here and while his spirit is unmatched by any other individual, bits of his humor and compassion will stay with us forever.

David George Leyba was born on April 21, 1955 to the union of Jess Leyba Jr and Jennie Leyba in Denver, Colorado. Dave grew up exploring the streets of Denver with his family and many friends, where they attended Cathedral High School together.... View Obituary & Service Information

The family of Mr. David George Leyba created this Life Tributes page to make it easy to share your memories.

Send flowers to the Leyba family.