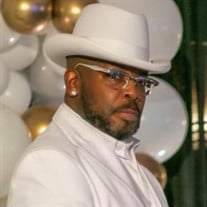 Craig Douglas Hysaw Sr. was born September 6, 1961, in Denver, Colorado to his parents Charles D. Hysaw, Sr. and Betty Lou Hysaw. He was the second child born to this union. He was raised surrounded by his three brothers Howard, Kenny, and Charles Jr. Growing as a child Craig was always getting into things. He also enjoyed eating good food. He would often ask after eating dinner “what we eatin’ in the ‘morrow?” Craig grew up in Parkhill. He played football for the Skyline Pirates, PAL Raiders, and PAL Knights. Craig also played basketball for George Washington High School through his junior year. He was known in Parkhill as “Saucy-D” because he was skilled and smooth in everything, but anyone who knew him was immediately captivated by his sense of style Craig joined a dance group named “Sweet Degree” with his childhood friends Michael, Kacy, Dorothy, and the love of his life Denise Thurman. Craig and Denise married January 16th, 1988, in Denver, Colorado. To this union three children were born Craig Jr., Corey, and Syreeta. Between 1984-1988 Craig played in basketball tournaments along with his brother Kenny. Craig enjoyed spending time with his family and watching sports; his favorite football team was the Oakland Raiders. He prided himself in his unique domino skills. Craig loved to cook, especially BBQ. He always took road trips, he enjoyed singing and dancing, he was an avid gun collector. Craig appreciated fashion, he was known to never wear the same suit twice”. Craig gave his life to Christ and was later ordained as a Deacon with Greater Mount Olive. As a child he attended Union Baptist Church, he later joined Ebenezer and Greater Union, where he sang in the choir. Prior to working for Rose Medical Center, Craig’s first job was at a Bagel shop downtown. Craig worked for Lockheed Martin formerly known as Martin Marietta for 40 years, he began as a janitor and through hard work and perseverance became a Senior Mechanic. He is proceeded in death by his Father Charles D. Hysaw, Sr. Craig Douglas Hysaw Sr. departed this life to embrace the Lord on April 29th, 2022, in Amarillo, Tx. Those left to cherish his memory and morn his loss includes his mother Betty Hysaw, wife, Denise Hysaw; 3 children, Craig Jr. (Deja), Corey, Syreeta (Micah); brother Howard (Diane) Nichols, Kenneth (Tish Johnson) Hysaw, and Charles (Sheila Kelly) Hysaw Jr., 5 grandchildren, 3 great-grandchildren, nieces and nephews.

Craig Douglas Hysaw Sr. was born September 6, 1961, in Denver, Colorado to his parents Charles D. Hysaw, Sr. and Betty Lou Hysaw. He was the second child born to this union. He was raised surrounded by his three brothers Howard, Kenny, and... View Obituary & Service Information

The family of Deacon Craig D. Hysaw created this Life Tributes page to make it easy to share your memories.

Send flowers to the Hysaw family.