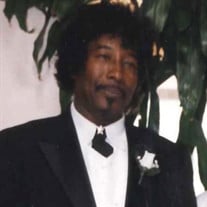 Bernard Gray came into this world on December 28, 1938, in Carthage, MS as the only child of Robert and Lou Ella Gray. His early years of life were spent in Mississippi. He grew up with a host of Aunts, Uncles, and Cousins until he and his parents moved to Colorado. The humility and well-roundedness of his character can be attributed to his Parents and Grandparents Harvey and Vera Mae Hartfield, with whom he spent every summer of his youth with. Bernard was the first-born Grandson of Harvey and Vera Mae Hartfield Clan. Bernard attended and graduated as an alumnus of Manual High School. After high school, he enlisted in the armed forces and served his country as a Naval Officer. With his honorable discharge from the Navy, Bernard returned to Mississippi to wed his bride, Ruth Jackson. The two started their family life together in Colorado and Bernard was the proud father of Tanya, Jacqueline, and Denise. Bernard held a career as a Head Chef for Union Station for many years. After leaving Union Station, he embarked on his career with Safeway Salvage as a Forklift Operator for several decades. During his tenure at Safeway, he met and fell in love with Teresa Hughes, to whom he was married until her homegoing in 2018. They shared many years together with their blended family of 6 children - Tanya, Janelle, Jacqueline, Denise, Nadia, and John Robert, Jr. An avid sportsman, Bernard enjoyed fishing, camping, and hunting. He faithfully tuned in every weekend to watch the Wild Kingdom and Wide World of Sports. He also had a love for Western television shows and movies. Football and basketball were his passions and in true form as a Coloradoan, he was a Diehard Broncos Fan. Bernard served the Park Hill community through partnering with MADD Dads; mentoring, uplifting, and imparting words of wisdom to the youth. Bernard was well known by his neighbors, which he never met a stranger. Anyone who was blessed enough to have known him; fondly referred to him as Bernie. Bernard was preceded in death by Lou Ella Gray (Mother) and Robert Gray (Father), Teresa Hughes (Wife), and Harold LeRoy Brown, IV (Grandson) Bernard leaves to mourn his passing his Children - Tanya Kennedy (Ryan Kennedy, Sr), Janelle Hughes, Jacqueline Ridout (James Ridout), Denise Chatman (Willie Chatman, Sr), Nadia Hughes (Byron Davis), and John Robert Hughes, Jr (Kenjina Littlejohn); his Grandchildren - Dionne Clarrett, Devon Hughes, DeDe Hughes; Sareya Brown (Harold Brown III), Marcus Chatman, Danielle Hughes, Willie Chatman, Jr, Rashee Chatman, MyAuna Hughes (Benjamin Ott), Keajah-Rae Brown, Breanna Hughes, Anbrelle Hughes, Destiny Hughes, Aliyah Hughes, Jevonte, Hughes, Darious Hughes, Keshad Hughes; Great Grandchildren Darelle Hughes, Davion Hughes, Jah’Liek Brown, Danieva Hughes, Dazion Hughes, Joseline Hughes, Imani Brown, Aaliyah Brown, DeShaun Hughes, Ja’Niah Hughes, Lo’Riah Hughes, Dakeek Hughes, Giovonni Hughes, and La’Naya Hughes.

Bernard Gray came into this world on December 28, 1938, in Carthage, MS as the only child of Robert and Lou Ella Gray. His early years of life were spent in Mississippi. He grew up with a host of Aunts, Uncles, and Cousins until he and his... View Obituary & Service Information

The family of Mr. Bernard Gray created this Life Tributes page to make it easy to share your memories.

Send flowers to the Gray family.