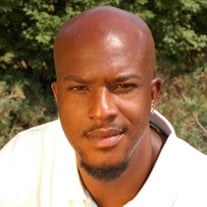 Arthur Lee Ashley III was the fifth child born to the family and was a highly anticipated baby boy. An Army brat, he was born to Arthur and Selma Ashley on May 12, 1975, at Fort Polk, Louisiana. As a child, Arthur was curious, active, and fun-loving. Neighborhood kids gravitated to him, and his yard would be full of kids. Extremely competitive, he loved to watch and play sports. Arthur was a loyal Denver Bronco’s and Nuggets fan and had a competitive nature that often extended to family game nights that sometimes lasted into the next day and beyond. He would win and kindly thank us for hanging in there to finish the game. Highly intuitive, he was believed to be a gifted child who would process information quickly, understand the rules, and develop a plan, all while waiting for the rest of us to keep up! Arthur attended Rangeview High School, Pickens Technical College, and earned his diploma from Overland High School. Soon after graduation, Arthur began his journey as an uncle and young father. He surrounded himself with cousins and close friends that he treated like siblings. Arthur loved hard, worked hard, and played hard. On Father’s Day 2021, when asked about his philosophy on fatherhood, he shared that it is a continuous cycle of hard work, rest, play, fun, repeat. His immediate family called him Little Arthur and as the youngest sibling, he never let them forget that. Little Arthur was the one that kept everyone all on their toes, from jumping into pools and having to save him, to rescuing him from a rooftop he fearlessly climbed. Full of energy, he was a creative “engineer” and could make a toy out of anything the world presented. With a huge personality, contagious smile, and one of a kind laugh, Arthur never met a stranger because he was friendly and could talk to anyone. Back in the day, Arthur was a class clown with a magnetic nature. His charm, charisma, and good looks brought all the girls to the yard. Once, at a family gathering in 2014 with all the Ashley Girls present, someone asked, “When are you going to make Tanya an Ashley Girl?” Arthur was speechless. Just a few months later, he proposed to Tanya and she said “Yes!” Arthur married Tanya, his best friend and the love of his life, on June 7, 2014. Together, this union produced a blended family of nine beautiful children. Arthur overcame multiple challenges throughout his life and would use those experiences to educate others. He was a caring father who was passionate about the love for his family. While his children may not have always agreed with his advice, he was coming from a place of love. He was a hardworking man proud of his independence, homeownership, and his recent remodeling project complete with Man Cave and pool table. Mostly, he was proud of his wife and children. Arthur’s greatest joy was being with family. No matter the challenges life dealt, he persevered and was resilient. He was generous and always willing to lend a helping hand. If you were blessed to be in his circle of friends, you can attest that the connections were life-long. Many people pass through our lives, but anyone who knew Arthur (a.k.a. Slimm), would agree there’s no one like him. Sadly, Arthur preceded his parents Arthur Lee Ashley, Jr., and Selma Ashley in death. He leaves to carry on his legacy, his wife, Tanya Ashley, nine children: Kali S. Greene of Iowa; Ka’Ron D. Ashley of Florida; DeOviyon Overstreet of Colorado; Khalil D. Ashley of Colorado; Kapri Ashley of Texas; Taeshaud Jackson, of Colorado; Keasia Davis of Colorado; Ki’Sani J. Ashley of Colorado; and London Ashley of Colorado; two grandchildren; four sisters: Arletha Ashley of Colorado; Terri Ashley (Gil Brown) of Virginia; Arlene Lanier (Ken Lanier) of Colorado; Darlene Ashley of Colorado; four aunts, two uncles, and a host of loving nieces, nephews, cousins, and friends.

Arthur Lee Ashley III was the fifth child born to the family and was a highly anticipated baby boy. An Army brat, he was born to Arthur and Selma Ashley on May 12, 1975, at Fort Polk, Louisiana. As a child, Arthur was curious, active, and fun-loving.... View Obituary & Service Information

The family of Mr. Arthur Ashley III created this Life Tributes page to make it easy to share your memories.

Arthur Lee Ashley III was the fifth child born to the family...

Send flowers to the Ashley family.